The greenhouse gas we exhale, drink and extinguish fire with.

CO₂ is an uncolored and non-smelling gas at room temperature which, directly freezes into solid state below -78℃（"dry ice"） at normal pressure. The (dry mole) fraction of CO₂ in atmosphere is around 400 ppm today but is rising for each year due to more carbon dioxide being released in the atmosphere. The gas is active in the large carbon cycle since plants use CO₂ for photosynthesis and living beings evaporate CO₂ when they breath.

Carbon dioxide has a perfectly linear molecule due to the C=O double bonds.

CO₂ is regarded as non-toxic at low concentrations. At higher levels above 1200 ppm it causes tiredness and at levels above 50000 ppm unconsciousness and eventually death. Carbon dioxide is a major greenhouse gas and due to its steadily increase mainly caused by fossile fuel combustion, it is believed to bring on global heating. All greenhouse gases are compared to each other using the unit CO₂ equivalents expressed as the global warming potential (GWP), which is the heat rise the same amount of CO₂ will cause during a period of 20, 100, or 500 years, most commonly the time period is set to 100 years. CO₂ has by convention a GWP of 1. More powerful greenhouse gases are for example methane or dinitrogen oxide, which have a GWP of 25 and 298, respectively. The GWP value for a gas molecule depends on how stable it is, how strongly it absorbs IR radiation and where in the spectrum the absorption peaks are. 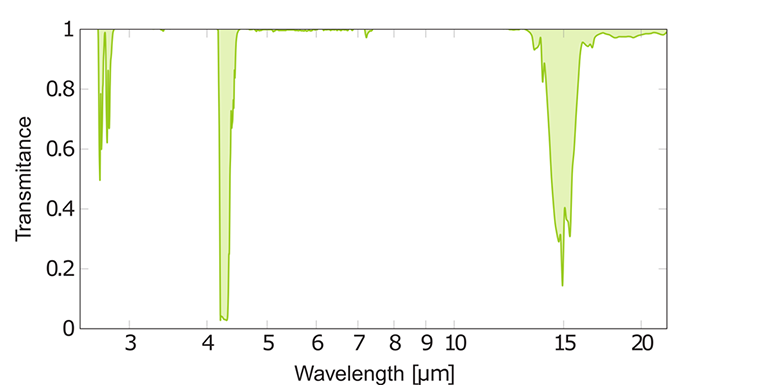 The IR spectrum of carbon dioxide has a strong absorption band consisting of many overlapping peaks. This band, caused by unsymmetrical C=O stretching, is placed at a wavelength of 4.3 μm. CO₂ molecules in the atmosphere absorb emitted heat radiation from the earth at this wavelength and in that way decrease cooling especially during clear nights. The mechanism of the increasing amount of carbon dioxide and other more powerful greenhouse gases is that they block IR radiation from escaping from earth back to space. The average temperature on earth is about 16℃ but without any greenhouse gases it would be around -18℃.