The family of explosive gas.

Hydrocarbons are organic compounds with the general formula CxHy. As a rule of thumb, many carbon atoms in a hydrocarbon molecule give higher boiling and melting points. For example, buthane C₄H₁₀ is a gas at room temperature whereas the compound octane C₈H₁₈ is a liquid. All of them are flammable and often used as fuels in various applications. For example buthane is found in LPG, liquefied petroleum gas and octane is the major hydrocarbon in gasoline. Hydrocarbons are also common for fabrication of plastics and as solvents. Hydrocarbons are divided into four main groups:

Propane, C₃H₈, is a typical alkane with three carbon atoms. Ethene, C₂H₄, is the smallest alkene, with one C=C double bond.

Next is two variants of drawings of the most typical arene benzene, C₆H₆. The example to the right is more common, showing that all electrons are equally shared between six carbon atoms in a flat ring. 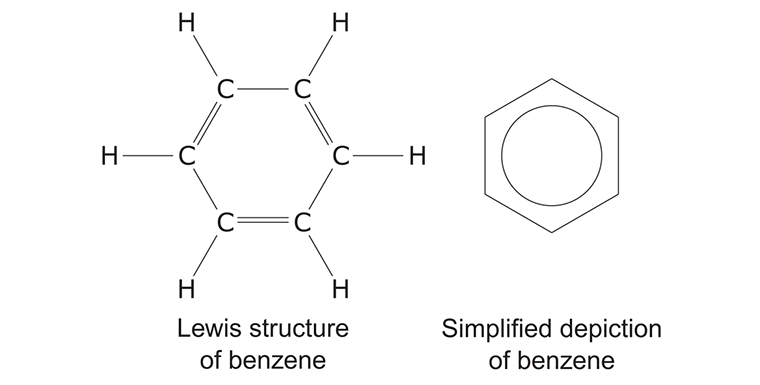 Lewis structure may become cumbersome and hard to read in the case of more complex molecule structures. As a response to this simplifications (such as the simplified depiction) has been developed. These are based on the fact that carbon always take four bonds (and hydrogen only takes one bound) and thus forming the rings seen in the example above. 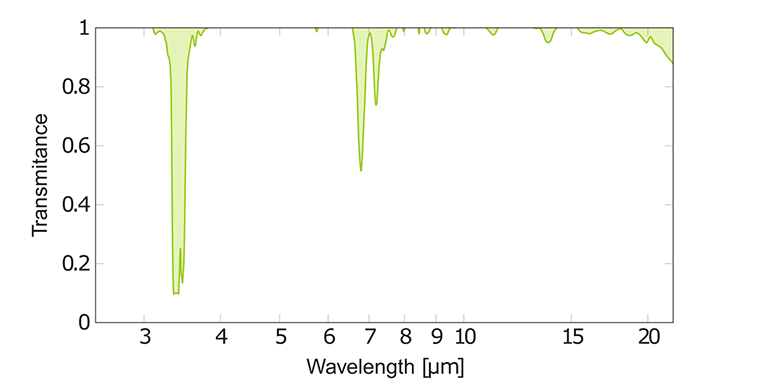 Regardless of the molecule formula or exact composition of a hydrocarbon mixture, the hydrocarbons have a peak at 3.4 μm. The C-C stretchings from alkane chains absorb in weak broad bands between 7.7 - 12.5 μm. Besides, there are strong peaks from --CH₃ or --CH₂ groups at 6.7 - 7.7 μm due to C-H bending. Typical alkane peaks for hexane are shown in graph above.

A double bond in an alkene gives C=C stretching at 6.1 μm. A sharp vibration band near 6.7 μm indicates presence of a benzene ring in an arene.