C₂H₄ is a colorless gas with a slightly sweet smell. The vapor can cause tiredness or dizzyness and gives a high risk for suffocation. Ethene is very flammable and could easily be ignited by sparks. Ethene is well-known for its ability to stimulate ripening of fruits. In nature the gas is produced during plant metabolism and it's classified as a plant hormone. Also it's used for producing plastics such polyethene (polyethylene) and polyvinyl chloride (PVC). 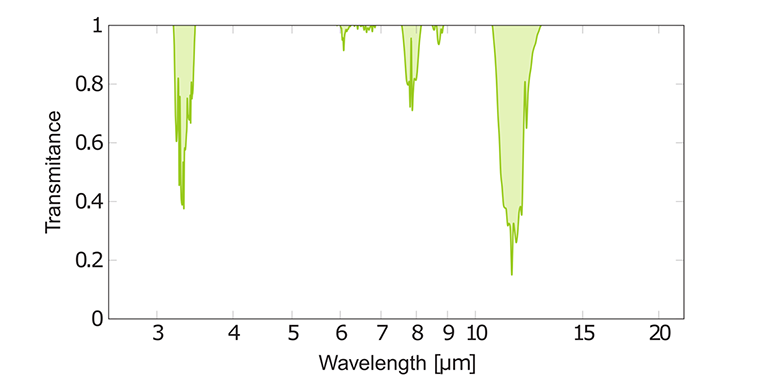 The IR spectrum of ethene is rather uncomplicated due to its simple structure. It has a strong band at 11 μm due to H-C-H out- off-plane wagging. Also, ethene has relatively weak absorption peaks at 7.1 μm from H-C-H scissoring and 3.2 μm from C-H assymetric stretching. Note that the C=C double bond in the C₂H₄ molecule cannot absorb IR radiation, because it has a totally symmetric vibration. Such a bond is called IR inactive.