Methane (CH₄), the smallest hydrocarbon, is an uncolored and non-smelling gas. It has a symmetrical non-polar structure, where the carbon atom is surrounded by four hydrogen atoms in a perfectly tetrahedral arrangement.

CH₄ is regarded as non-toxic for humans but may displace oxygen in a closed space and cause a risk for suffocation. CH₄ is extremely flammable and may form explosive mixtures with air.

Normally the gas is formed in swamps or other oxygen-poor environments such as soil, manure or sewage plants. Other major methane sources are mining, processing and use of coal, oil and natural gas. The IR spectrum of methane is less complicated than spectra from larger hydrocarbons because it has a simpler structure.

Unfortunately, methane is a powerful greenhouse gas. Methane emissions are expressed in carbon dioxide equivalents using its global warming potential (GWP). Then one kg CH₄ is more than 20 times as effective at trapping heat in the earth's atmosphere as one kg of CO₂, within a time horizon of 100 years. 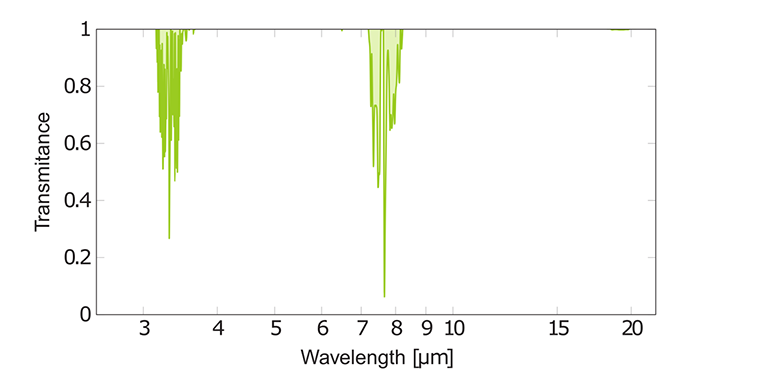 In the IR spectrum of methane there are two strong absorption bands consisting of many overlapping peaks. They are found at 3.3 μm and 7.7 μm due to C-H stretching and bending modes, respectively.